Fresh from the rooftop

Some chefs order their produce from a large company. Some shop at the local farmers market. But the chefs at Stem Kitchen and Garden in San Francisco can simply step onto their rooftop for the freshest fruits, vegetables, herbs and edible flowers.

They can thank Lara Hermanson and her team for that.

Hermanson is co-founder of Farmscape. Since 2008, the Bay Area-based company has designed, installed and maintained hundreds of urban farms throughout California. Clients range from agrihoods such as Rancho Mission Viejo in Orange County—agrihoods are communities centered around an organic farm as a central amenity—to Faithful Farm that sits atop Levi’s Stadium in Santa Clara.

In partnership with Bon Appetit, the food-service company that helped launch Stem in 2018, Hermanson’s team transformed a 1,000-square-foot ornamental garden into an urban farm that produces about 3,000 pounds of produce for the restaurant each year.

Admittedly, the small site can meet only a fraction of Stem’s needs.

“What we tend to focus on are the things that they’re not able to get in bulk anywhere else,” Hermanson explains, “or things that have a tendency to spoil or become damaged in transport.”

Stem’s rooftop farm is a source of inspiration as well as ingredients.

“It’s a completely beloved space,” Hermanson says. “I think people are surprised how much food you can grow in an area that’s mostly known for being cloudy and overcast and windy and cold. And mostly people just enjoy having this quiet garden, this respite in the city.” 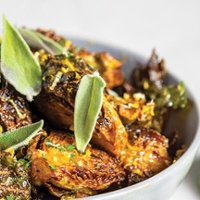 Chiles and bay leaves add a savory note to the tangy-sweet glaze used here to coat tender Brussels sprouts. The versatile side dish fits well at occasions from casual dinners to holiday feasts. 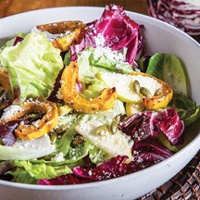 The delicata is named for its delicate, edible skin, which provides a nutritional bonus to this gorgeous salad. Feeling adventurous? Add a little cinnamon, cayenne pepper and chili powder. 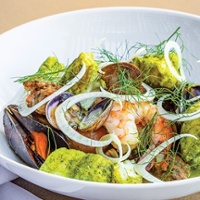 This hearty stew is loaded with the flavors of the ocean—ling cod, clams, mussels and shrimp. Serve with grilled bread and lemon wedges. 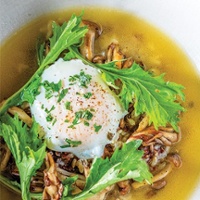 Shimeji mushrooms have a nutty, umami flavor and a slightly crunchy texture. Here, they’re combined with whole grains, poached eggs and a savory broth to create a light but satisfying meal. 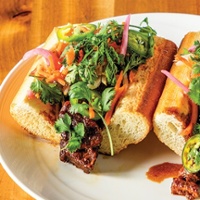 There are plenty of delicious versions of a bahn mi sandwich, but which one is best? Try this and you may have your answer!